This blog is the replacement of the my preview Topband blog here http://topband.blog.cz/ because of an agressive advertising and flash banners inserted by the blog provider. For older posts access You can visit the old blog link which will exist still... but it will not be updated anymore.

Effective from 1st Jan 2017 please paper QSL via OM-bureau only. 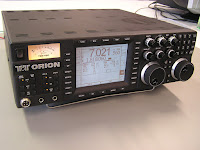 Hi all,
some TT Orion 565 newbies (566 also) have troubles to set up their new toy correctly (yes, these famous rigs are still in ham shacks of many operators mainly because of their excellent receiver, ergonomy and features). However, any setting is a very subjective matter I will try to gather as many informations and settings as possible from most experienced DX performers and low band DX-ers to be able to get an idea how it works and how to make own setting.
Orion's AGC Controls
Orion has four sets of AGC settings: SLOW, MED, FAST and PROG. Each set is independently adjustable with PROG providing the widest range of adjustment.

Within RX menu there are three AGC settings (with separate values for each of the sets):
* AGC HANG time,
* AGC DECAY rate,
* AGC THRESHOLD level. 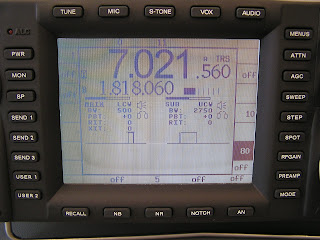 Here are the AGC settings found worked best for Bill, W4ZV:
(Originally published on Topband mailing list)
At night I was listening to YI9ZF on 80 while waiting for him to move to 160.
He was right at my noise floor and was QRV for quite awhile before 0200.
It was an excellent chance to play with Orion's AGC settings, and also to experiment with K6STI's DSP Blaster on Orion's audio output.
Using these, I could take Kas from about 339 to 449, and I seemed to be hearing better than most. At times he dropped below my noise floor to the point that I thought he had gone QRT. Then he would again rise above the noise and be OK copy.

I was frankly astounded at what DSP Blaster would do! It was not only helpful for finding Kas' signal using the waterfall display, but made Q4 copy into solid Q5 copy. The Coherent CW feature splits the signal into in-phase and out-of-phase components, and when you listen to this with stereo headphones, it almost makes the signal sound like it "jumps" out of the noise, even though it is only a theoretical and measured 3 dB difference. I saved both my settings for Orion and DSP Blaster so I can experiment more with this in the future.

No DSP or fiddling to copy him 100%, although I had left Orion's settings as noted above. I worked him for #311 on Topband and listened to him for the next 1.5 hours until he QRT at his sunrise just before 0400. Kas peaked 579 so he was even stronger than A45XR was at his sunrise! The AGC settings were quite comfortable to use and I could copy most of the EU and Russian stations Kas was working (UN7AM was 579!), and even many that he could not copy...I felt like I was VE1ZZ! The only major problem was when some strong NA stations would call zero-beat and of course that took the AGC awhile to settle down afterwards. I believe it would be possible to use similar AGC settings in a contest especially if you didn't have extremely strong stations inside Orion's passband. I may give this a try if I decide to do ARRL DX CW on 160.

Again thanks to Sinisa for causing me to play with the Hang and Decay settings. I had discovered the effect of Threshold myself but probably would not have tried such high settings for Hang if he had not made those posts. I've now had Orion nearly 6 months and am continuing to learn new things about how to use it properly! I also continue to learn more about K6STI's DSP Blaster which is a fantastic program IMHO.


Here is what Bill, W4ZV wrote to DL6FBL regarding the setting the AGC of the Orion 565 in the contest):
"I can say with certainty that Orion's default AGC Threshold settings are far too sensitive for 160. Threshold is set for 3 uV as default, and the lowest I ever had it in the CQ 160 was probably 30 uV, and sometimes higher. You can easily observe this by tuning to a quiet part of the band and adjusting Threshold to the maximum 192 uV. It will become very quiet (unless there is extremely high storm QRN) at 192 uV. You then adjust it down until the background noise is an acceptable level. [...] The AGC is the most different aspect of Orion and many guys have made the same mistake. [...] Orion really takes a little time to understand. [...] The manual is also at fault for recommending AGC settings for weak signals that are far too low for 160."
73, Bill W4ZV
Well, it is the recommendation by Bill, W4ZV. In the next article I will post the setting from European DX performers to compare it.
73, Petr OK1RP
...-.-
Posted by Petr, OK1RP at 9:04 AM

Email ThisBlogThis!Share to TwitterShare to FacebookShare to Pinterest
Labels: Contesting, Operation, Others, Technical